The annual Iowa meat convention was held February 14th-17th in Ames, Iowa. On Saturday night an awards banquet was held and Polashek’s Locker was the winner of two awards.

Protivin – Paul, Judy, and Adam Polashek from Polashek’s Locker Service Inc. attended the annual Iowa Meat Processors Association.  The 72nd Annual Convention & Trade Show of the Iowa Meat Processors Association was held at the Gateway Hotel & Conference Center and the ISU Meat Laboratory in Ames, Iowa on February 14-17, 2008.  Processors from 48 plants and vendors in 41 booths were in attendance for the training sessions and the trade show.

The conference participants attended seminars on a variety of processing techniques used on beef, pork, fabrication of specialty cuts from the chuck, and sausage techniques at the ISU meat lab under the direction of meat extension specialist, Dr. Joe Cordray, and other staff members from the Iowa State University.

Polashek’s Locker is celebrating 25 years in the meat business in March of 2008 and would like to thank everyone who has helped us reach this outstanding milestone. 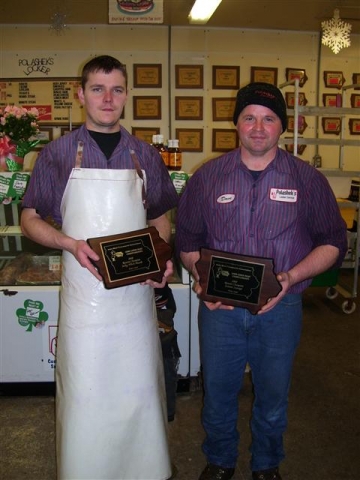